…The singers’ emotions, confidence, ease, their disciplined sound, musicality, and vocal technical skills manage to capture full attention of the audience and support the attitude of the desired and successful blending of youthful competence and professional leadership…

…I extend my warm congratulations to the choir on the concert repertoire as a whole and to the conductor in particular. May they persevere and always find a high-quality break from passing trends towards pure music, which the music of today desperately needs…

…At the concert marking the 30th anniversary of their work, under the leadership of the founder and conductor Zdravko Šljivac, Zvjezdice truly shone, showing their manifold splendor. The choir includes several ensembles and each of them realizes a full, authentic musical expression…

…Performance of Zvjezdice is characterized by numerous qualities: attention to beauty and clarity of tone and intonation, well thought-out, stylistically diverse but heedful and tasteful interpretations, highly disciplined singers, as well as high motivation and obvious love for music among the latter. Sincere congratulations!

“…under the vigilant eye of maestro Šljivac, we underwent a sublime and unforgettable experience. The choir achieved a homogeneous sound within its groups as well as coherence in total, also successfully managing all musical parameters – clear articulation, intonation, phrasing and dynamic contrasting…”

“…It was a singular unprecedented event.” “The Zvjezdice, together with their conductor Zdravko Šljivac, have surpassed themselves – giving a superb performance within the Music Biennale Zagreb. No words can do justice to the magical musical world of the Zvjezdice and there are no epithets that could describe its beauty. The repertoire rendered by the choir is at the peak of choral creativity and performance – in terms of contemporary composition and technique.”

“Whoever has seen the Zvjezdice choir perform with maestro Šljivac can only admire his dedication to excellence and his method of achieving it, as well as immensely enjoy their wonderful singing.”

In all respects, the “Zvjezdice” are a very special ensemble and a bright example of the right way to direct the young towards the joy of music.

The “Zvjezdice” are not little stars – they steadily adorn our, sometimes gloomy, musical skies and never allow us to sink into the greyness of mediocrity.
—the “Zvjezdice” always remain at the highest level.
The speed by which they master those (for young voices particularly demanding) features of renaissance and baroque, and complex intonation and rhythmical variations of contemporary choral music alike, is nothing short of amazing. It is a real feat to create, but then also to maintain, one such ensemble that does not lag in any way behind the leading choirs of the same category worldwide.

They steadfastly illuminate the way to what is most splendid and most exalted in a man – the ideal of harmony and beauty.

Thanks, above all, to maestro Šljivac, a careful judge of talent who has cultivated a beautiful sound and achieved an enviable vocal technique, each performance with Zvjezdice was a special musical experience for me.

This first-class choir has spawned a number of outstanding soloists in classical and pop music. At maestro Šljivac’s request, I wrote a number of complex polyphonic arrangements of Croatian Christmas carols, which Zvjezdice performed wonderfully, with excellent intonation and enviable diction.

In Zvjezdice we found an ensemble that marks the renaissance in the art of girls’ singing, following a long stagnation in this country. The most impressive thing about them is their expert score reading, the thoroughness and clarity of the technical elements, and their refined vocal artistry, factors which have never been merely for show, but rather always serve a genuine, spontaneous musical expressiveness. It is obviously maestro Šljivac, their founder and director, conductor and teacher, who has set such high standards for them.

My recording sessions with Zvjezdice have always been and will be the most exciting moments of my long career as a music producer. Quite simply, Zvjezdice sings fantastically. Being a member of Zvjezdice is a way of thinking and a way of life.

What more can a person say about the “Little Stars” after all those fine things we have heard, read and seen? They are beautiful heavenly stars and we expect only the best and most beautiful things from them. They are indeed fifty little stars dressed in heavenly garments, with seraphim voices. Thanks to their excellent conductor and singing teacher, Maestro Šljivac, we enjoyed in the homogenous sound of the choir and the ensemble which performed a very interesting program without a single flaw, bringing out with feeling and subtlety all the finesses of the dynamics, accents, rhythm, tempo, harmony, breathing, direction and, of course, exemplary interpretation.

Zdravko Šljivac and Zvjezdice made a brilliant appearance. The choir is characterized by an outstanding level of professionalism in the highest sense of the word. Another element and quality of this ensemble is the flawless purity of the relations between the individual parts. I can safely say that this is the first time we have had such a perfect children’s or girls’ choir in Croatia. I must especially point out that Zdravko Šljivac and Zvjezdice have achieved respectable results on the European level. 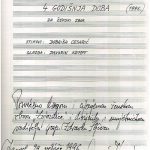 I completed “The Four Seasons” for a polyphonic a cappella girls’ choir in February 1996, and the work was premiered by Zvjezdice under the direction of maestro Šljivac in the spring of the following year. It was a great honour for me to have the opportunity to work directly with the choir, as a repetiteur and interpreter of my compositional ideas. Just as I regard this setting of Cesarić’s verses as one of my most personal expressions as a composer, so I count my collaboration with Zvjezdice and maestro Šljivac as one of my most beautiful musical friendships.

For many years now, it has been a special pleasure and a true musical celebration for me to work and make music with the marvelous girls of the Zvjezdice Choir. Each and every one of them, along with their conductor Zdravko Šljivac, is a genuine spark of contagious musical joy which enables them to transfer their youth, with such incredible ease, into supremely professional music-making. This is why each recording of a performance with them has always been a valuable lesson for me in professionalism and discipline, as well as, of course, a true artistic experience… 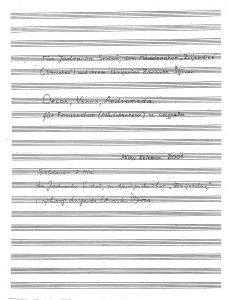